I have a confession to make. I really don’t like fundraisers. After nearly 10 years in the nonprofit world I have planned A LOT of them. Galas, golf tournaments, trivia nights, stuff online, and even a night on Broadway. Each of these had their own nuances and successes, but generally all achieved the same result – money raised for a great cause, all while bringing people together to celebrate the work of an amazing organization.

A year ago, as Amber and I were putting the final touches on our goals for the year, she suggested we host some type of event. We were not sure what we wanted to plan, but we knew we wanted something fun, something not crazy complicated, and something different. During the brainstorming session, I remembered my time at the Center for Autism Education. Every Summer, just before we welcomed the students back, I would coordinate a field day for the staff. The day included kickball, trivia, washers, and my favorite…Minute to Win It games. The staff always enjoyed them. They provided a time to team up with their friends, do silly stuff, and laugh at each other. It also just blew off steam like we were all kids again.

After sharing the idea with the board of directors, we all agreed it would be a good time, and decided to run with the night of MC² Bash & Brews. From that day, the hard work of recruiting teams and sponsors began. I sent out a few hundred emails and made about as many phone calls to fill the room. The board chipped in with recruiting their friends and partner companies. The team came up with the games to be played, ordered the food for the attendees, and decided how we should make everything blue and orange (my favorite colors).

After the dust settled of planning and recruiting, it was “game day.” The food was in place, the beer was prepped, and the room looked amazing! As the night began, the fifth floor of Downtown T-Rex started to fill with nearly 100 of our closest friends. At 5:30 sharp, I invited everyone to enter the “Thunderdome” and read the instructions for the rest of the night. I knew we would have fun, but what I didn’t expect were laughs and memories made by each group competing. I watched them shake gumballs in two-liters, balance quarters on popsicle sticks, and slide Oreos down their face. It was a battle to the end which ended in a three-way tie between Preferred Systems Solutions, AT&T, and Aegis Strategies.

That morning Amber and I had a feeling this would happen, and we would have to declare a winner somehow. She suggested the idea of a Lip Sync Battle to separate the men from the boys and who doesn’t love that show. We knew it had to be a part of the challenge. The three finalists picked their songs and the hilarity ensued. We watched renditions (with back-up dancers) of Prince’s 1999, Psy’s Gangnam Style, and the winner, PSS Fed, nailed it with their own version of the Spice Girl’s Wannabe.

I drove home that night reminiscing about what just happened and found myself smiling from ear-to-ear. As I mentioned earlier, events are not my favorite, but this was by far my favorite event I have ever hosted. It was simple, fun, and I got to watch adults act silly together. All the while, raising over $12,000 for an organization I love and have the pleasure to lead. 2018 is already shaping up to be “our year” for programs and growth. This was a reminder that people value our mission and believe in what we are doing.

I am thankful for all the companies who sponsored and sent their teams to join us. I am grateful for the volunteers who served beer and made the games fun. I am appreciative of my team that each chipped in to do something to make the night fun. I am smiling because I know the impact the funds raised will have on our programs. Thank you for being such a big part of the Midwest Cyber Center! 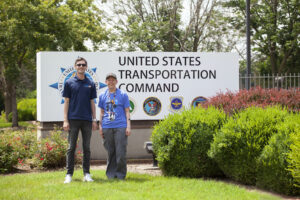 Weasle and Mike at USTRANSCOM

Weasle Forsythe and Her Desire to Learn

Born in Bay City, Texas, Weasle (pronounced like the animal)[...] 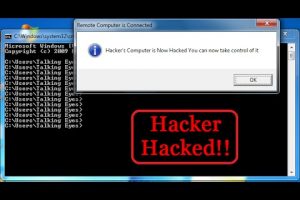 The Cyber Hack That Changed the Course of a Life

The Cyber Hack That Changed the Course of a Life[...]